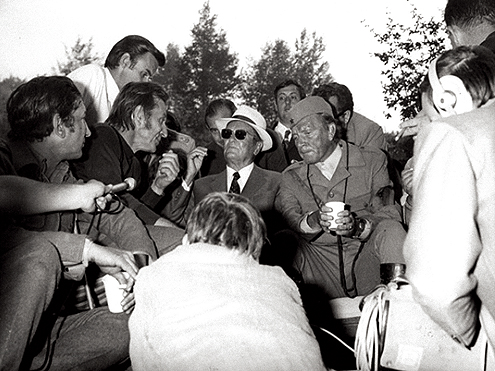 A man in his 60s anxiously moves around the small kitchen of the apartment he is sharing with his wife. He quarrels with his her. His old friend has just died, and he is trying to decide if going to the funeral is a good idea. What will “they” say? He can’t just go, the funeral is across the border. In the other part of the city. What will be the consequences? Will he get help that he needs if “they” hear he went to the funeral?

This is a description of a part of the plot of A Stranger (Obrana i zaštita), Croatian director Bobo Jelčić’s first feature film, which has recently won him the Best Director Award at the Bratislava International Film Festival. The man is played by veteran actor Bogdan Diklić, who received the Heart of Sarajevo for best actor at the Sarajevo Film Festival this year. The film is set in Mostar, the largest city of Herzegovina, still split between Croats and Bosniaks (Muslims). There is no physical barrier, but the psychological border is there: Croats simply do not cross into the Muslim part of the city, and vice-versa.

A Stranger is a co-production between Croatia and Bosnia and Herzegovina, directed by a man born in Mostar and now living in Zagreb, and stars a Serbian actor with roles in more than 130 films, most of which were made in Yugoslavia which fell apart in 1992. Although this production set-up and the film’s cast and crew line-up might sound strange for a film with direct political references (however obliquely they are presented), this has become a staple of Balkan cinema in the past 10 years.

While immediately after the wars of the nineties Serbia, Croatia and Bosnia and Herzegovina had been making numerous war-related films out of which most were straight-out propaganda, since the 2000’s the film-makers from the region have been cooperating increasingly. This is natural as they belong to the same cultural background and share the same language – what was once called Serbo-Croatian has since been split into Serbian, Croatian, Bosnian and Montenegrin languages, but it is practically the same thing: everybody understands everybody else perfectly well.

In 2004, there were five films made in all of the territories of the former Yugoslavia that were co-productions between two or more of these countries. In 2012, there was 15 such films. The reasons for this are both creative and economic.

The Socialist Federal Republic of Yugoslavia had one of the most vital film industries in Europe from the sixties all the way through the eighties. One of the main reasons for this is that the legendary president – some call him dictator, while others consider these times the best of their lives – Josip Broz Tito loved cinema and built the studio Avala in Belgrade, which would later host numerous international productions. The film production system in Yugoslavia was well-organized and stable and produced some of the most important European films, including Veljko Bulajić’s The Battle of Neretva, part of the “partisan genre” about Second World War, which was nominated for Best Foreign Language Film Oscar in 1969 and starred Yul Brynner, Franco Nero and Orson Welles among others. For more details on this, see Serbian director Mila Turajlić’s excellent documentary Cinema Komunisto.

This strong national cinema also gave birth to the Yugoslav Black Wave, with authors such as Dušan Makavejev, Želimir Žilnik and Živojin Pavlović, whose films were sometimes banned at home while winning awards at festivals like Berlin or Venice.

Croatian veteran director Rajko Grlić’s Border Post was, in 2006, the first film co-produced by all the countries of the former Yugoslavia, which tells a story set in the final days of the old country. And Grlić started making films back in Yugoslav times, was in the Cannes main competition in 1978 with Bravo Maestro, and was part of the “Czech School”, which also includes film-makers such as Goran Marković, Lordan Zafranović, Goran Paskaljević and, to an extent, Emir Kusturica- all of them studied film at the Prague FAMU.

After the passions have calmed down a bit after the 90s wars, the first to break the barriers between the recently warring nations were exactly film-makers. All of the older ones used to work with their colleagues in other countries, and for them it was natural to re-connect. The younger generations, those who were teens during the war, quickly realized that each of the markets is too small to support itself – with the exception of Serbia which had huge attendance for its populistic comedies, but also for more serious local films, however, all this went down the drain when the old exhibition network crumbled in 2005-2006 and multiplexing had not yet begun – so they resorted to co-production as means to draw financing from European funds such as Eurimages.

2013 saw perhaps the biggest “cumulative” success of films from the region at the festival circuit. Besides awards for Circles (*see interview with director Srdan Golubović), Danis Tanović’s An Episode in the Life of an Iron Picker picked up two Silver Bears at the Berlinale: the Jury Grand Prix (unofficially the “second place” in competition) and Best Actor for non-professional Nazif Mujić.  This edition of the Berlinale also saw the world premiere of the film from the beginning of this story, A Stranger. Additionally, short animated film Rabbitland by Serbia’s Ana Nedeljković and Nikola Majdak Jr. received a Crystal Bear in the Generation section.

In July, A Stranger won the Bauer Award of the Motovun Film Festival – a prize designed to celebrate the best films from the countries of the former Yugoslavia, selected by film critics and voted on by professionals from the region. The idea behind the award is that the region decides on its best films, as opposed to European film festivals, or to international juries at Sarajevo, whose region is much wider anyway: eligible for competition are films from the space from Austria to Turkey, including Romania, Hungary and Bulgaria, and this year the main award was won by In Bloom from Georgia.

In August, An Episode in the Life of an Iron Picker opened the South-Eastern Europe’s most important event, the Sarajevo Film Festival. A Stranger won the Special Jury Prize (again, unofficial second place) and Heart of Sarajevo for best actor for Diklić. Rabbitland received a special mention in the short film category, and Circles – screened out of competition, just like Tanović’s film – was voted the audience’s favourite.

So how come that Circles, a Serbian film – co-produced with Germany, France, Slovenia and Croatia – won the audience award in Sarajevo ahead of local darling’s Danis Tanović film? Both films are, in their own ways, stories about consequences of war in Bosnia. While Tanovic deals with a very immediate problem – lack of social and health system and racism – Golubovic’s story is about redemption, forgiveness and consequences of a real-life heroic act of Serbian soldier Srdjan Aleksić who saved the life of his Muslim friend and was beaten to death by his fellow soldiers. The presence of Aleksić’s father and the speech he gave to the packed 3,000-seat open air cinema moved to tears even the most hardened of the attendees, including the writer of this story who saw the film two times before.

Since Circles has come out, Srdjan Aleksić has finally gotten official recognition in Serbia and is getting a street in Belgrade named after him. This certainly does not mean that the wounds of the war which ended 18 years ago have been mended: nationalism is still rampant in Serbia, Croatia and Bosnia, as all the new governments in these countries have been finding it easier to blame problems on other nations then to actually work in favour of the people, and kept feeding them hatred through media. The rhetoric has changed, has become softer and more politically correct than during the war when it was straight-out propaganda against the enemy, but the reasoning is still the same, just polished and packed a little bit differently.

But a film like Circles is perhaps what all these societies need to actually close this vicious circle that the region has been stuck in for the past 20 years. Of course, films do not change the world, but can influence individuals to think a little bit differently, and then when you put more individuals together, it can consequently bring the public discourse and awareness to a different level.