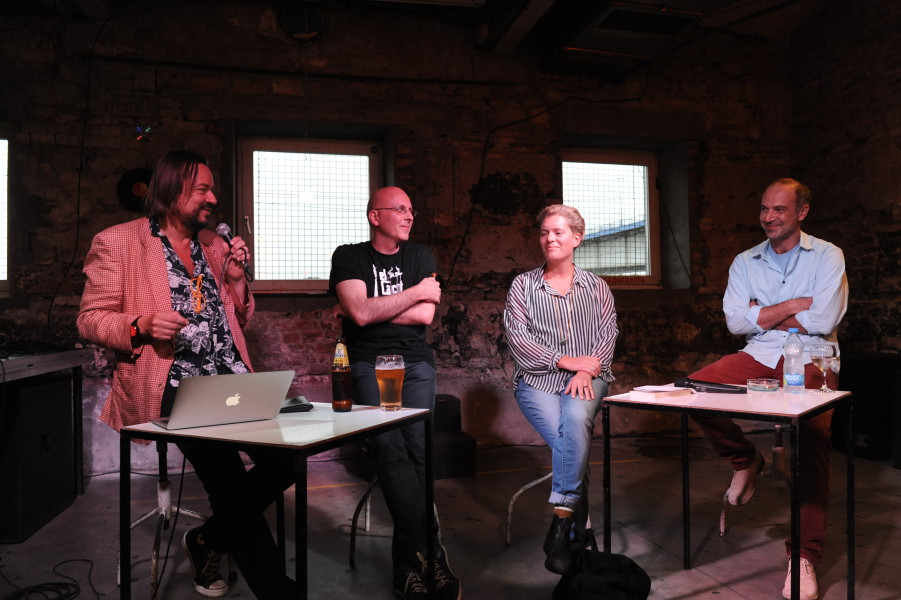 Two Global Bars, in two days, in two different parts of Europe, with the same topic?

t happened last week. In KC Grad (European Center for Culture and Debate) in Belgrade’s Savamala and at Global Reporting in Stockholm’s Gamla Stan. All, in a way, as the the commencement of Global Reporting’s multimedia project caled ‘Trans Europe Express’ that is intending to become an ongoing platform for the creative dialogue between Sweden/Scandinavia and the Balkans.

The aim is also to have Global Bars in Belgrade as a regular program, and to create an ongoing Swedish-Serbian, but before all European, discussion platform.

The theme for the two bars was ”Identity crisis? Re-thinking nations & ”isms” in Sweden and Serbia”. The outcomes and conclusions of the discussions moderated by David Isaksson, Global Reporting’s founder and CEO, were naturally slightly different but in many ways complementary.

The discussion in Belgrade – with panellists Cristina Wassholm, Swedish journalist and writer based in Belgrade, Dejan Ubovic, cultural producer and the founder and director of KC Grad, and Predrag Dragosavac, Serbian journalist working for Global Reporting – focused more on the ”branding” of states and nations, and on possible ways to ”upgrade” the Serbian identity.

On the other hand, the focus of Stockholm’s Global bar – with panellists Peter Aronsson, professor in Culturan Heritage and the Uses of History at Culture Studies department, Linköping University, Helene Larsson, and Predrag Dragosavac – was primarily on cultural institutions and the role that they play in forming the national identity.

Both discussions were inspiring and eye opening, but their symbolic value seems to be even greater. They demonstrated the necessity of an arena for the ongoing direct intellectual exchange between Sweden (Scandinavia) and Serbia (Balkans). The idea of applying the Global Bar concept into Serbia/post-Yugoslavia came from a desire to create a European and global framework for public debate, to open new perspectives and provide wider contexts for national debates and dilemmas. Both in Sweden and Serbia.

With that in mind, this initial bridge between Belgrade and Stockholm could be understood as a ”scan” of the general situation. Although these two regions are geographically distant, have very different historical experiences and current realities, not only that certain common grounds have been located and marked; it is also the huge space for further exchange and cooperation that has been registered. To put it simply: Serbia could use Sweden as a role-model in a number of areas – economical innovation, welfare state, (gender) equality etc – while Sweden needs an encounter and exchange with Serbia/the Balkans in order to reassess its own models, conceptions and preconceptions, and also obtain a more clear idea of ”self”.

Professor Peter Aronsson was the one to set the general framework: ”Both the Balkans and the Nordic countries are macro regions of Europe that have national states, but also ideas of pan-slavism and pan-nordism which are cultural constructions that can be used for very different purposes. They can be and have been used to claim hegemony over the neighbours. That was the case with the idea of Norden from the 17th up to the 19th century. However, the idea was changed later and became an asset in new ways, connected with democracy, egalitarian values and making the threshold to use violence to solve conflicts much higher than before. That’s one example of how transnational ideas can transform hostility into the sense of neighbourhood.”

Throughout the discussions both in Belgrade and in Stockholm it became obvious that these ”transnational ideas” that transformed the notion of ’Norden’ still didn’t reach the post-conflict ex-Yugoslavian states. Or, at least, that sense of neighbourhood that is so present among the Nordic countries is still missing. ”Very much so because the whole political framework is still fragile, unclear, unstable… The Nordic countries didn’t have wars and changing of borders for so long; in the Balkans, people still don’t know how many more new ’states’ and ’nations’ will occur in the next months or years ”, Predrag Dragosavac said.

Different political realities are reflected through official cultural institutions. In Norway, Sweden and Denmark there are museums that nurture the Nordic cultural heritage, the idea of culture that is connecting over the state borders, and a Nordic ”sense of trust and cohesion”.

”The Nordic Museum (in Stockholm) stresses much more now than in the 19th century its Swedishness, it became much more Swedish. That started in 1905 when Norway left the Union, but it has been reinforced”, Aronsson noted, emphasizing that the idea of state is not static. ”In national museums it is possible to observe how changes in society are reflected through the official culture”, Aronsson claimed.

In Belgrade, the National Museum has been closed for more than a decade. The Museum of Contemporary Art has also been closed for years. ”I wish they were closed because of ideological reasons, because that would mean that the Serbian political elites have some ideas and nurture some ideologies. Unfortunately, it’s beyond any ideas and ideology. The state of the most important museums in Serbia is just an illustration of the complete confusion, corruption and lack of any vision”, Dragosavac said.

According to Peter Aronsson, the Moderna museum is the most modern expression of Swedish nationalism: ”That’s the institution that demonstrates rationality, democracy and other values connected with the Swedish welfare model. Even the right wing party needed to accept that concept.”

On the other hand, Dragosavac stated that in Serbia even those parties proclaiming themselves as the most ’advanced’ and most ’pro-European’ didn’t yet discover the ideological potential of culture: ”It’s a completely different idea of politics. There, it is all about immediate personal material gain. In that sense, culture is not seen as interesting at all.”

Still, in recent years Belgrade and Serbia have become an increasingly interesting destination for a number of international travellers, including Swedish ones. The general image of Serbia (in the Swedish and Western public) is still, though, very much torn – on one hand, there are images and memories of war, extreme nationalism, homophobic violence; on the other, there is the label of ’party capital of Europe’, that is nurtured by many, starting from the Lonely Planet.

Helene Larsson emphasized that Serbian reality is very much between those two ”extreme” images.

”I came to Serbia as the Swedish cultural attaché in 2009 and I remember visiting Kragujevac soon after that, having a workshop with children, from 9 to 12 years old. At the end of the day I addressed them – ’I will be staying here for four years, what do you want me to do?’ These 12 children talked to each other and then said: ’We want you to change the media image of Serbia in Sweden.’ For me that was really a ’wow moment’. Something really has changed in the meanwhile, but that picture of going to ’splavs’ and getting drunk is still not the picture that Serbs themselves created. That is something very much imposed on them.”

Trying to define that ”secret” of attraction of Belgrade and Serbia both Helene Larsson and Cristina Wassholm used the very same word: ”the energy”. It was, they say, ”the energy of the city and people” that attracted them so much that they wanted to come back, to live and work there.

”I came to Belgrade for the first time in 1996, during the big winter demonstrations and I was fascinated by the force of those activists. It was the peculiar energy of a society that doesn’t allow you much freedom or hope for the future, and then certain people always mobilize with the idea of change”, Cristina Wassholm says.

Although the political, economic and social development in Serbia after the political change in 2000 became a huge disappointment for many, since the country got stuck in a political dead end, economic crisis and huge unemployment, it is still the ’changing process’ that Dejan Ubovic, of KC Grad, underlines as the crucial attractiveness of Belgrade and Serbia at this moment.

”I meet a lot of young people from all over Europe who are coming to Belgrade, and KC Grad. In many cases it was mouth-to-mouth word that brought them here, not a big strategy of the Serbian tourist organization. For young people, it is challenging to be a part of the changing process, and in Serbia they can certainly be. The situation is not easy at all, but the story is open, and the people are open, so still everything is possible”, Ubovic says.

It is on that ”open story” where we landed with Global Bar in Belgrade. And we are looking forward to continuing the talk.