“We are the lost generation.” I got stunned when I heard that, all other thoughts in my head were blown away. That sentence gave an echo of those young people who got marked for life of the First World War trauma. But this was the year of 2013. Are there lost generations in today’s Europe?

I was in Serbian capital Belgrade. I wanted to see with my own eyes what has been said about Serbia and its development after the devastating wars of the 1990s. My knowledge about Serbia and the Balkan region was possibly not so deep. Compared with average Swede I knew maybe a bit more, because I was interested in the region. My experience is that average Swede is moderately interested in the Balkan area, but is not into the understandings of that region’s political history and development.

Newspaper articles in Swedish media and BBC documentaries on the Balkans were the major sources for me, but that media covering was dishonest. Most of the sources had their base in the West and there was bias in the articles.

Those few times when Swedish media and other media from the West cover Serbia, the headlines are that everything is fine: “Serbia is on the right track. Authorities have captured Karadzic and Mladic. The country takes a step closer to the EU.” However, those who read these magazines get one-dimensional picture of Serbia, which is that Serbia is a good learner who follows the Western-directives.

When you read these articles your own view is shaped by it.   When you get the chance to travel to the country and speak to many different people, the experience and the idea you get about the place are “slightly” different than the nurtured by media. 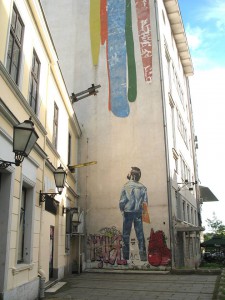 That day when I heard this sentence about the lost generation in Serbia, I was at a cultural hub where there was a lecture on Sweden. After the lecture, I went to a place to have a chat with some of the participants.

The hope of a bright future transformed into apathy during the 90s. After the war was over a major economic downturn followed, the infrastructure was destroyed, overcrowded old buses rolled on the roads, the facades of houses were muddied…

During my conversations with people in Belgrade, I learned that not much has happened since the early ‘2000s. The development has gone in a negative direction. One illustrative example of such a direction is politicians’ total disinterest in cultural development. The Museum of Modern Art in Belgrade has been closed for several years. The National Museum has been closed practically for a decade; its’ renovation is not completed and no one knows when it would be.

Only graffiti decorate the streets of Belgrade. Nevertheless, it is mostly football hooligan’s slogans, which on the other hand, gives you a glimpse of immoral developments in the cultural and intellectual field.

Another illustration of the Serbian “positive pace towards EU” is “great” economic situation. Unemployment is “great”, i.e. extremly high. However, even those who formally have jobs are often uncertain… In Sweden, we take it for granted that the 25th of each month you get the salary. Therefore, it sounds very strange when someone tells you that you never can be sure that the wages will actually be paid. Even if the wages are paid, it is not large sums.

During my conversations with Belgradians I learned that there is a trend of “provincialisation”. Provincialisation means several thing: disapperance of the wider Yugoslavian context, and shrinking not only of the bigger market, but also of the “perpective”; due to disasterous economic situation in the smaller towns, there is a permanent migration towards major cities which become overwhelmed by “small town philosophy of life”, too. At the same time, “brain drain” is also permanent – highly educated people are leaving the country, for good.

As I walked the streets of Belgrade, I saw sadness in the eyes of many people that I met. Especially among those who were around 40 years old, those people who are called the lost generation. Some readers may think that I am exaggerating this, that I imagined. I really wish that it was just my imagination.

Despite all the gloom, there were some bright spots in Serbia; I felt that there was a certain trust between people. That at least this human side was not completely gone. It gives some hope.