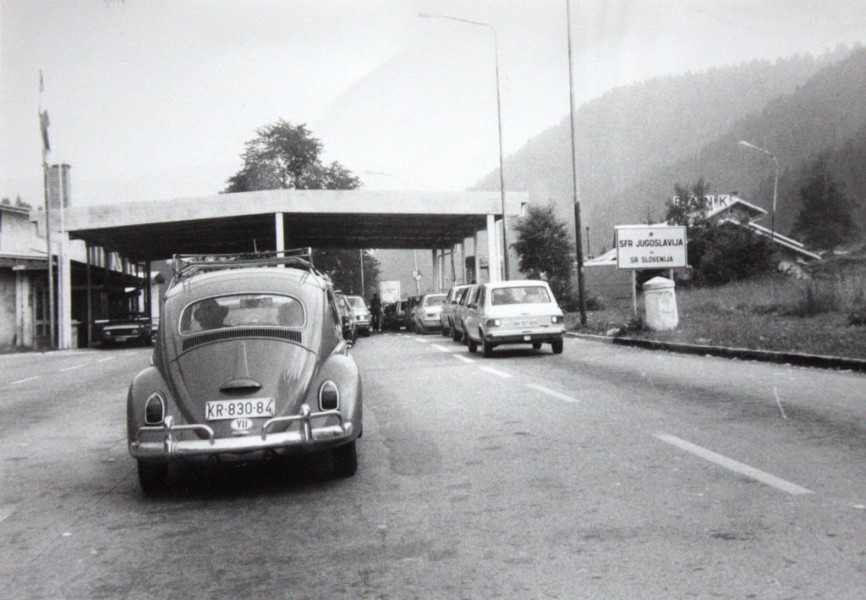 Today Yugoslavia is a word heard in partisan films and pop songs of a goneby era and read in history books. What Yugoslavia is not is an existing homeland for several million people, who, different to proud owners of the new Balkan countries have been true to Yugoslavia with all their being. My parents are among those people, and consequentially, so am I.

The political concepts from the recent history of Eastern Europe seem to have romantic air about them. Whenever I say that I was born in former Yugoslavia, everyone wants to know more. „Was it a hard or soft dictatorship?“ „Is it safe to go there now?“ „Well, you had an unexpectedly calm break-apart from USSR, didn’t you?.“

And I have to say „No, that was Ukraine“.

And they say „Sorry, of course, what I meant was you split peacefully between yourselves“.

And I say to a slightly better informed Westerner „I think you mean former Czechoslovakia“.

The foreigner, informed or uninformed, secure about his or her knowledge of world history or secure of the lack of it, is usually puzzled. Then Tito is brought to the table and, at least with the older ones, the things move on quickly from there. „Ah, you had quite a liberal system“, and so forth.

It, however, can be a big surprise how little Europeans, not just the youngest ones, know about Yugoslavia.

Those who do are unsure whether to use the prefix Ex- or Former.  While even to the bittermost opponents of the concept, i.e. the creators of the new countries, once again is becoming just Yugoslavia as they, for the first time are becoming almost certain that its cosmopolitan essence and the liberal vibe will never threaten their nations again, the Yugoslav concept and all its implications cannot be put in a box of one word interpretations.

Yugoslavia is primarily bound by prejudice which different nations or groups of nations have of it.

The Dirty South of Craving

The countries of the former Yugoslavia, particularly those south of Croatia, are perceived by the common subconscious of the Slovenians as The Dirty South. They are also perceived as the South of Craving, creating with its music, lively spirit and spontaneity the missing component in the predominantly alpine mentality of the Slovenians.

I came to Slovenia at the age of 12, straight from the besieged Sarajevo. While I was de-frosting from the shocks of war by the coastline, and interesting post-Yugoslav phenomenon took place in my midst.

The Slovenian coastline belonged to Italy for most of its history. After the Second World War it became Yugoslavia, and the predominantly Italian population fled fearing the Communist revenge. The deserted cities were then inhabited by inland Slovenians too poor to make the ends meet in the villages where they lived. The new inhabitants decided that they will immediately develop high-end tourism along the less than 50 kilometres long coastline creating a boutique destination for the most privileged among the Yugoslavs.

This made sense, as Slovenia has been the most privileged part of Yugoslavia, since it was an integral part of Austro-Hungary and other German kingdoms throughout its history and its stability was never seriously challenged by the Ottoman presence, as was the case with the southern Yugoslav republics.

So the financially and in other ways most prosperous republic of the socialist Yugoslavia sent empty busses with big speakers to various parts of the impoverished Bosnia and Herzegovina of the 1960’s to acquire physical labourers. They came in large numbers, and from that point on, the Southerners became builders, cleaners, and, generally, the workers connected with all things dirty, while the Slovenians did the office jobs.

So there I was, in a class full of people. A typical film setting: a boy comes from a war-torn place; he stands alone, while the eyes of the restless children piercing his tender essence, etc. The romantic setting however had an interesting twist: out of more than 30 people in the classroom I was almost the only one with a Slovenian name and surname. The surrounding children were the offspring of the generation of builders, cleaners and, generally, the workers connected with all things dirty. To add to the list of dirty things was the war, as conceived by the land of their parents and executed there with utmost brutality.

So, to clean themselves, these children who almost all had Bosnian surnames, and with many of the first names the parents did not bother making them sound Slovenian, decided, subconsciously but with amazing synchronicity, that the best way for them to go about truly becoming the part of the clean world, is to dissociate themselves from all things southern. This also meant from some of the things which I brought into their surroundings. Since I learned Slovenian very fast, there was little opportunity for them to pick up on me on that one, but they frequently made jokes about how people from the south spoke, including their parents, I suppose.

In Slovenia, the recipe for the people from the south who want to fully adapt to the new society has been: learn the language, albeit not necessarily to perfection, do not excel, be liberal in practice and anti-cosmopolitan in perception. Whoever met such expectations became the new Slovenian. My family was unable to meet them.

Category: At first hand, In the first person, On the road, Our writings
Author: Andrej Klemencic